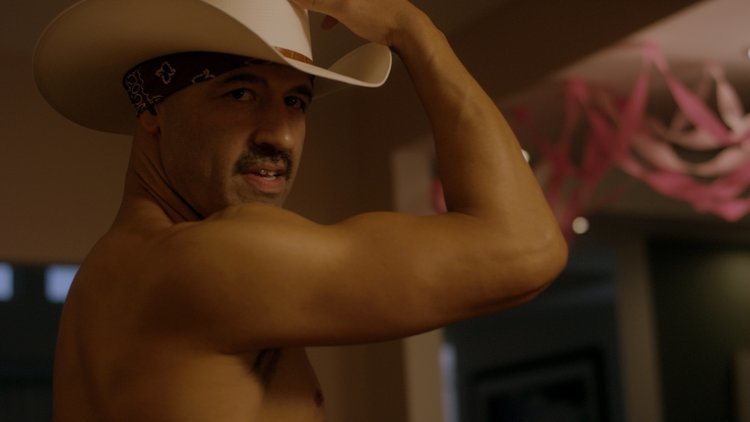 Vimeo announces April’s slate of Staff Pick Premieres, with a different one debuting each Wednesday; Vimeo’s popular Staff Pick channel is curated by a five-person team that highlights the best short-form content on the platform. The Staff Pick laurel emblazons each selected short, which has often screened at a high profile film festival, and the short can get between 50,000 and 200,000 views in one day. To check out the Staff Pick Premieres channel, visit https://vimeo.com/channels/premieres.

This month’s slate includes Tribeca Film Festival hit “At the End of the Cul-de-Sac” by Paul Trillo and “Hot Seat,” a comedy of errors in which a group of school girls hire a stripper, by Anna Kerrigan.

April 5th: “At the End of the Cul-de-Sac” – Narrative Drama (Dir. Paul Trillo)
Synopsis: In one continuous shot, a man has a public meltdown in the middle of a residential cul-de-sac. The neighbors gather together and watch, debating how best to deal with the unstable man. What unfolds is a constantly shifting scenario in which community's cultish public shaming is taken to extreme heights.

About the Filmmaker: Paul Trillo is a New York-based director who challenges both curiosity and illusion. From creating the first fully mobile bullet time camera rig with 50 Nokias to choreographing aerial smoke shows using drones, Paul’s constant pursuit to develop and play with new techniques has led to a strikingly fresh body of work. His varied interest in technology, comedy, and visual design permeates throughout. Many of these experiments have been selected as Vimeo Staff Picks and have been featured in a variety of outlets from Creator’s Project to Scientific American. Paul has been listed as one of D&AD’s Next Directors and has recently won “The One Show’s One To Watch” and “30 Under 30 Film Festival’s Director to Watch” awards.

About the Filmmaker: John Wilson worked as a private investigator in Boston for a year right after graduating from film school in 2008. Inspired by his previous occupation, he started shooting in a style that he calls “documentary memoir,” capturing lo-fi quotidian images of people and places mediated by his distinct narration style.

April 19th: “Johnny Physical Lives” – Documentary (Dir. Joshua Neuman)
Synopsis: “Johnny Physical Lives” is the story of the secret world of two brothers making a rock ‘n’ roll documentary as one goes through treatment for leukemia. When younger brother Jonathan passes away in the midst of the production, older brother Joshua must finish the project on his own. A first time filmmaker, Joshua Neuman weaves footage of his brother Jonathan in and out of the hospital during treatment with an interview of Jonathan shot by famed documentarian Albert Maysles and live animation to “physically” bring to life Jonathan’s inner world, showing how he experienced cancer through the eyes of a rock star: the hospital became a seedy hotel, chemotherapy, the scandalous addiction fueling his music, and nurses, groupies at his beckon call.

About the Filmmaker: Joshua Neuman is a Los Angeles-based filmmaker and the older brother of Jonathan Neuman. He grew up in Paramus, New Jersey, went to college at Brown University, and after a year of touring with his own band, Floorwalker. He received a Master’s Degree from the Harvard Divinity School, where he studied under Cornel West. He taught courses in the Philosophy of Religion for five years at New York University before joining the founding editors of the satirical Jewish culture magazine, Heeb. Los Angeles Weekly called Neuman “one-part philosopher, one-part Beastie Boy” and Marc Maron called his The Big Book of Jewish Conspiracies (co-authored with David Deutsch, published by St. Martin’s Press, and optioned by Plant Films) the “smartest silly book ever written.” He has appeared on The Travel Channel, BBC Radio, VH1, The Sundance Channel, A&E Biography, Court TV, National Public Radio, and Extra and his speaking engagements have taken him around the globe. Since moving to Los Angeles in 2010, he has written jokes for The Friar’s Club Roast of Quentin Tarantino, edited the international fashion magazine Flaunt, and served as the head of content for two-time Webby Award honoree, GOOD. He was a producer of the ESPN Films “30 for 30” about ex-Los Angeles Laker A.C. Green and is the host of the Los Angeles Rams podcast, “The Greatest Show on Grass.”

April 26th: “Hot Seat” – Narrative Drama (Dir. Anna Kerrigan)
Synopsis: Teenaged Andrea uses a male stripper to gain the respect and admiration of cool girl Daphne. “Hot Seat,” which is based on a true story, explores coming-of-age sexuality and the complexities of relationships between teen girls.

About the Filmmaker: Anna Kerrigan is a Los Angeles-based filmmaker with a background in independent film, digital storytelling and theater.  She also directed “The Chances,” a digital series written by and starring two deaf actors, which will also premiere at the 2017 Sundance Film Festival. Her Gotham-nominated digital series “The Impossibilities” (2015), a Vimeo Staff Picked comedy that she wrote and directed, follows the interwoven storylines of a magician and a daffy lesbian yogi.

She was selected for the 2016 Fox Global Directors Initiative for episodic directing, is a Film Independent and Sundance Fellow and is developing a feature and high concept television show with Stephanie Langhoff and the Duplass Brothers. An accomplished playwright as well, she’s developed her theater projects with productions and development at Second Stage, the Williamstown Theatre Festival, Ensemble Studio Theater, Naked Angels and SPACE at Ryder Farm.Kerrigan graduated from Stanford University with a BA in Drama, then lived and worked in New York City for ten years.