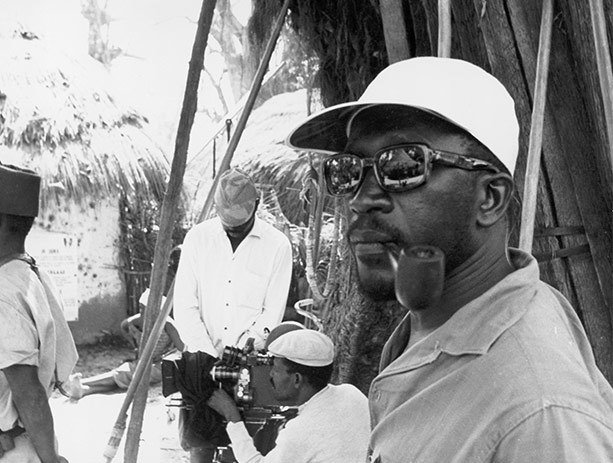 Copy as a plain text
Copy as a plain text
Vimeo announced today that it will provide global free streaming – from June 9th through June 12th – of the award-winning documentary SEMBENE!. From filmmakers Samba Gadjigo and Jason Silverman, the film celebrates filmmaker Ousmane Sembene, the “father of African cinema,” who spent decades shaping a meaningful, visionary cinema for a newly independent Africa. A film festival favorite, SEMBENE! made its world premiere at the 2015 Sundance Film Festival and subsequently screened at the 2015 Cannes Film Festival. The film is available to stream here: http://vimeo.com/ondemand/sembene.

This global free stream is part of the project Sembene Across Africa, which is being billed as “the largest community screening in history.” With more than 100 free screenings in 38 African nations, along with other countries in the Diaspora, Sembene Across Africa has set the ambitious goal of gifting the story of a real-life African hero to the communities that will most appreciated it.

Sembene Across Africa is supported by NGOs, universities, activists, educators, film festivals, cultural centers and local governments throughout the continent, with funding from the Ford Foundation, the Sundance Institute, and a Kickstarter campaign.

“Vimeo has long celebrated and welcome stories from voices too often under-celebrated around the world and we’re excited to partner with the Sembene Across Africa in what will hopefully be the largest community screening in history," said Peter Gerard, Vimeo’s GM, Entertainment Group. “By releasing the film for free on Vimeo, we can bring this powerful local African narrative about one of the continent’s earliest filmmakers to audiences around the world."’

Sembene Across Africa is motivated by Sembene’s desire—unfulfilled in his lifetime after 50 years of focused work—to return African stories to the African people. His works revisited history from African perspectives, called out corrupt leaders and celebrated what he called "the heroes of the everyday." Sembene spent 50 years making films and writing books in a tireless and forceful attempt to reorient Africans after generations of colonization. Unfortunately, 10 years after his death, Sembene—a true hero of cinema and of self-empowerment—remains unknown to most young Africans.

“Sembene Across Africa is designed to inspire anyone working for African progress,” said Samba Gadjigo, the co-director of SEMBENE! and Ousmane Sembene’s official biographer. “Using the new tools of cultural empowerment—digital delivery, social media, grassroots organizing—we hope to share Sembene’s powerful story across an entire continent, to the large audience that will appreciate SEMBENE! the most.”
About Vimeo
Vimeo is the world’s leading all-in-one video software solution. Our platform enables any professional, team, and organization to unlock the power of video to create, collaborate and communicate. We proudly serve our growing community of over 200 million users — from creatives to entrepreneurs to the world’s largest companies. Learn more at www.vimeo.com.