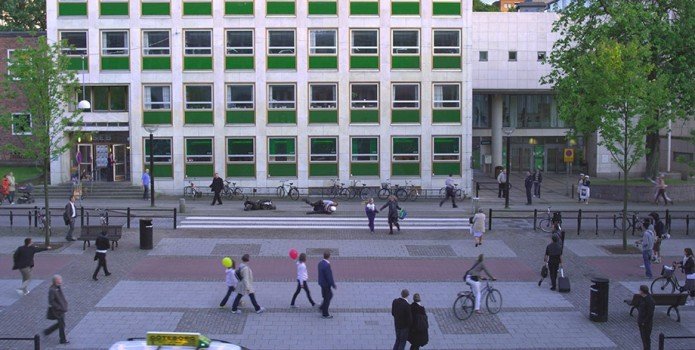 (New York, NY | July 25, 2017) Vimeo announces August’s slate of Staff Pick Premieres, with a different one making its global online premiere on Vimeo each Wednesday. Vimeo’s popular Staff Picks channel is curated by a five-person team that highlights the best short-form content on the platform.

To check out the Staff Pick Premieres channel, visit https://vimeo.com/channels/premieres.

Advance links to all of the films are available; please reach out to CaitlinH@Vimeo.com to request.

August 2nd: “Incident by a Bank” – Comedy (Dir. Ruben Östlund)
Synopsis: Detailed and humorous account of a failed bank robbery: a single take where over 96 people perform a meticulous choreography for the camera. The film recreates an actual event that took place in Stockholm back in June 2006.

About the Filmmaker: Ruben Östlund started as a director of skiing films in the 1990s, and eventually went on to study at the film school in Gothenburg, from which he graduated in 2001. Together with film producer Erik Hemmendorff he is the co-founder of the production company Plattform Produktion, which produces his films.His first four feature-length fiction films were The Guitar Mongoloid (2004), Involuntary (2008), Play (2011), and Force Majeure (2014). The Guitar Mongoloid won the FIPRESCI Award at the 27th Moscow International Film Festival. “Incident by a Bank” won the Golden Bear for Best Short Film at the 60th Berlin International Film Festival and Grand Prix at Tampere Film Festival in 2011.

August 9th: “Fata Morgana” – Drama (Dir. Amelie Wen)
Synopsis: Inspired by true events, a grieving couple is forced to examine their marriage when they journey from China to the United States for the funeral for their only child.

About the Filmmaker: Originally from Beijing, Amelie Wen was accepted as a directing fellow at the prestigious American Film Institute Conservatory, receiving the Bison fellowship for promising Chinese filmmakers. Her first short film, “Home,” premiered at the Los Angeles Film Festival 2015 and would go on to win Best International Short at Raindance Film Festival and the HBO Films Student Competition Award at Savannah Film Festival among others. “Fata Morgana” had its world premiere at the Clermont-Ferrand Short Film Festival 2016.

August 16th: “Ivan’s Need” – Animation (Dirs. Veronica L. Montaño, Manuela Leuenberger, Lukas Suter)
Synopsis: Ivan is obsessed with the incredible softness of the dough. When kneading, he gets lost in intensive daydreams not accepting that sooner or later the master baker will turn every wonderfully elastic dough into horribly crispy bread. Until he sees Alva‘s looooong breasts.

About the Filmmakers: The three directors met in 2012 at Lucerne School of Art and Design where they studied Animation for three years and graduated in 2015 with their collaboration “Ivan’s Need.”

August 23rd: “Scent of Geranium” – Animation (Dir. Naghmeh Farzameh)
Synopsis: Immigration is a new chapter in one's life, a chapter with unexpected events that can take one's life down paths different from the one imagined. This film is an autobiographical account of the director's experience with immigration.

About the Filmmaker: Naghmeh Farzaneh is an independent Iranian filmmaker and animator based in Chicago. After finishing her BFA in painting in her hometown, Tehran, she found the stories she had to tell were bigger than the surface of a canvas. In her exploration for a new medium she began her first animated film, “Trapped in Time.” The work received international recognition in many film festivals. In 2011 she immigrated to the United States to continue filmmaking and earned her MFA in Animation at the Rochester Institute of Technology. Naghmeh has done extensive work in two-dimensional animation, collaborative works with independent artists and filmmakers, and served on the juries of several international film festivals.

In a short span of time, “Scent of Geranium” about her immigration out of Iran was officially selected in more than 60 festivals around the globe and was awarded in prestigious festivals such as the International Short Film Festival Oberhausen, Animateka Festival, 60th CINE Golden Eagle, San Francisco Independent Film Festival, 47th ASIFA East Animation Festival, Heartland Film Festival and the New Orleans Film Festival. Naghmeh has served on the faculties of the Rochester Institute of Technology, and Hobart and William Smith Colleges. She is currently a faculty member at DePaul University in Chicago where she teaches animation while passionately continuing her career as an independent animator.

August 30th: “Trepass” – Drama/Thriller (Dir. Mirrah Foulkes)
Synopsis: A woman walking her dog alone in the forest finds company she didn’t expect and an enigma she can’t comprehend. “Trespass” is a thriller about the nature of sympathy... and the merits of keeping your pet on a leash.

About the Filmmaker: Mirrah Foulkes has written and directed three short films including “Dumpy Goes to the Big Smoke,” which won the prize for Best Director at the Sydney Film Festival and was nominated for two AACTA Awards in 2013. “Florence Has Left the Building,” which premiered at the Melbourne International Film Festival and won the 2015 AACTA Award for Best Short Fiction Film and “Trespass,” which had its International Premiere at the Toronto International Film Festival in 2016. In 2013, Foulkes co-wrote the short film “Eugene” for the Intel and W Hotels Four Stories competition. Foulkes is the only female member of the Australian filmmaking collective Blue-Tongue Films.

Filmmakers interested in having their work considered for a Staff Pick Premiere can email premieres@vimeo.com for more information.
About Vimeo
Vimeo is the world's leading professional video platform and community. With over 175 million members across more than 150 countries, we help anyone grow their business by making it easy to create and market high-quality, impactful videos. Vimeo is headquartered in New York City with offices around the world, and is an operating business of IAC. Learn more at www.vimeo.com.